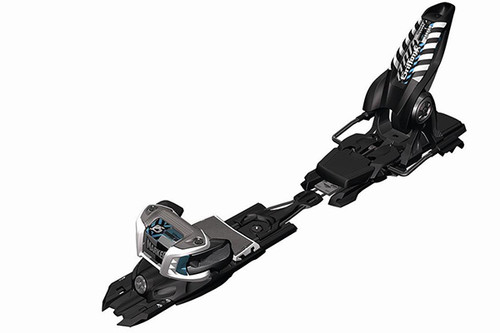 Please indicate if you would like 90mm or 110mm brakes above.

If you need 130mm brakes for these bindings, please click here.

The Marker Griffon Schizo Bindings are the go to bindings for aggressive skiers that want to have versatility in their skis without adding another ski. It has a multi-stance adjuster so you can hard charge through powder before lunch and then switch to the park for some afternoon rail sessions without heading back to the car get another pair of skis. The adjustment is fast and easy. The Stainless Steel Gliding AFD offers clean and consistent release values at all times regardless of snow, ice or dirt. Its Inter Pivot Heel has increased elasticity and superior holding power for the times you are freeskiing. The Triple Pivot Elite Toe provides the highest energy absorption which minimizes the chances for early release while also allowing for incredible energy transmission. Battle tested in a variety of conditions and terrain, the Marker Griffon Schizo can rule the entire mountain, powder, park or pipe. The Griffon Schizo features updated toes and heels for 2014.

All Marker bindings are equipped with a moveable AFD (anti friction device), allowing a precise release, unhindered by dirt, snow and ice buildup. The type of AFD is matched to the skier type, ensuring perfect functionality – from racing to junior bindings and even ski touring.

With a horizontally oriented spring, the Triple Pivot Elite Toe provides the highest energy absorption to reduce the risk of early release. The secure purchase on the boot lug optimizes power transmission and allows for durable, high energy use. The performance to weight ratio of the Triple Pivot toe is truly unmatched in the industry.

This industry-leading construction delivers superior holding power for all types of freeskiing. Its design focuses power in the direction of the boot sole, increasing elasticity. The overall design focuses on optimum power transmission.

The question used to go: where on the ski should I put the bindings? The popluar Schizo technology broke new ground, offering  the ability to move the stance fore/aft 3cm in each direction for the ultimate versatility. It allows the skier to go from pipe and park to all mountain skiing, or from hard, groomed snow to powder with the turn of a simple screw on the toe piece.

Perfect binding for the intermediate to advanced skier. Check it out at getboards.com.