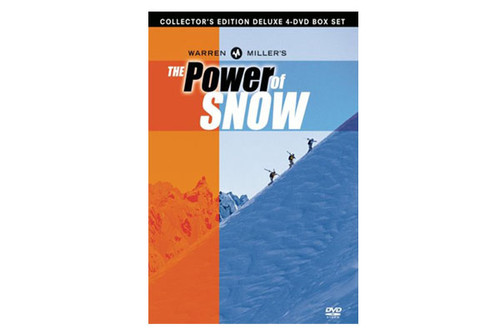 No other filmmakers are more passionate about documenting the human drama and thrills of winter action sports and adventure than those at Warren Miller Entertainment. For over 50 years their films have raised the bar by venturing to the planet's extremes to capture the greatest athletes of our times pushing the limits of human ability.

From Greenland to the South Georgia Islands to Iran and Wisconsin - these films bring you spectacular skiing and snow boarding from the top of the world and home again. Add to all this action the hottest contemporary music and personal commentary and it's easy to see why they have created a worldwide following that spans generations.

One needn't be an extreme snow-sports enthusiast to enjoy the beauty, wit, and endlessly inventive action-cinematography of Warren Miller's films. A pioneer in sports filmmaking, Miller began his career--as we find out in this excellent, four-title boxed set--shooting 8mm footage in 1947 Sun Valley, Idaho, keeping body and soul together with ketchup soup and wild rabbits. A half-century-plus later, Miller produces, narrates, and occasionally provides a cameo in his films; three of them, included here, are travelogues set in some of the wildest, most dazzling, and even exotic places on Earth.

The best of the lot, Cold Fusion, involves serious globe-hopping through four continents: Join a long, long hike through Kenya to ski what remains of a disappearing glacier, and later watch the surreal ballet of multiple "aerialists" launched high on the slopes at Colorado's Winter Park Big Air Expedition. Scale up--and snowboard down--an impossibly steep peak in Waddington, U.K., and then, believe it or not, ski Iran, a place "between dreams and awakening, of hot tea and cherry tobacco."

Ride provides its own thrills, traipsing after Whistler's avalanche hunters as they launch explosives clearing landslides before landslides clear skiers. Stick around for stops in New Zealand and France, plus helicopter skiing in the North Cascades, snowboarding the bouncy trail of the Breckenridge Bumps, and cross a war zone in Russia to reach (via creaky cable cars and choppers) the top of Europe.