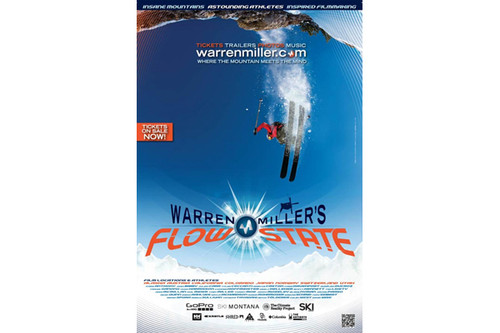 Available for Pre-Order!! Release date to be announced!!

The sixty third feature film from Warren Miller Entertainment brings audiences to a place only recently identified by scientists; a place they now understand skiers and snowboarders achieve where, the faster they go physically, the slower things appear to them mentally. This a place of such singular focus and connection with their environment, they can achieve things previously thought impossible. So come with us as we enter … the Flow State.

If this is the first time you've heard of it, it's probably not the first time you've been near the Flow State. It exists anywhere crisp winter air shocks your lungs and sunlight refracts off snowflakes. Think of the legendary powder of Utah's Wasatch Range, or the kinetic energy of terrain parks like the famed one at Northstar-At-Tahoe, or the daunting peaks of Alaska's Chugach. These are places where impossible becomes possible every winter, thanks to passion, creativity, and fearlessness of those who ride them.

Join the biggest names -- skiers like Chris Davenport and Daron Rahlves and a new guard including skiers Josh Bibby and Tyler Ceccanti and snowboarders Eero Ettala and Elena Hight -- in what traditional athletes like to call "the zone." From tricks you've never seen thrown to lines you'd never dare drop, you're about to experience the cutting edge of winter sports in places as far flung as Japan and Norway and as recognizable as the Colorado Rockies.

Perhaps the most remarkable thing that scientists have discovered about the Flow State is that people emerge from it improved; they're happier, more confident, more aware of their surroundings. Then again, that's a lesson every skier and snowboarder learned the first time they took off down the hill. So, join host Jonny Moseley and a cast of the best skiers and snowboarders in the business this winter as they bring snow sports fans the world over to the Flow State: Where The Mountain Meets The Mind.