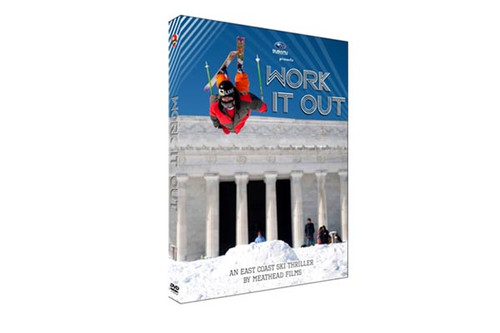 Videos Work It Out- Ski Dvd

Subaru of New England presents an East Coast Ski Thriller by Meathead Films: "Work It Out"
From record-breaking 5 foot blizzards in Washington DC to 10 inches of rain in New England, Meathead Films spent the winter of 2010 scouring the East Coast on the hunt for epic days. No matter the weather or personal fatigue, the crew was forced to roll with the punches and just work it out.
Tag along as the Meathead's relentless search takes them to the craggy White Mountains backcountry, urban alleyways of Maine, custom park jumps in New Jersey, and even to the Far East of Hokkaido, Japan on their first ever overseas voyage. Filmed in High Definition, 16mm, and Super 8mm film, "Work It Out" showcases the unwavering determination it takes to be an Eastern skier.