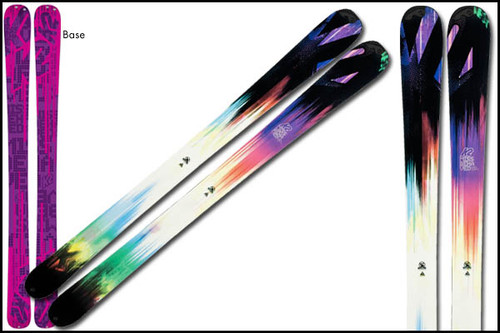 Comes with a FREE Ski DVD and FREE USA Shipping!!!!


Bigger is Better with this Original Fat Twin
This woman’s-specific Factory Team fat twin gets even wider in 2010-11. The K2 MissBehaved features All-Terrain Rocker to float through powder, blast through crud of just initiate easier on groomed snow. This new fat women’s specific twin incorporates Bi-Directional taper, a Twin Tech construction and Bioflex core, keeping the MissBehaved quick and nimble whether you are skiing forward in the park or landing switch on a backcountry kicker.
Baseline: All Terrain Rocker -70% Camber/30% Rocker

All-Terrain Rocker
Featuring an elevated tip for variable and soft snow performance and camber underfoot for power, energy and edge-hold in firmer conditions.

Bi-Directional Taper
The tip is still wider but closer in width to the tail. This lets the ski perform exceptionally well while skiing in the forward direction but the taper enables the skier to have similar switch arc for better and more consistent switch riding.

Powder Specific Tip Design
The widest point of this tip is the forward contact point as opposed to 7cm in front of it like most of our shaped skis. This design makes the ski more stable and predictable because it won’t hook or grab erratically in windblown snow and other variable conditions that you’re likely to encounter in the backcountry.

ABS Sidewalls
ABS is a polymeric material used in sidewall construction that primarily functions to protect the core. K2 uses ABS because of its dense characteristics and impact toughness that not only aid in the direct transmission of power but also make it very durable and resistant to moisture.

Tip and Tail Plates and Rivets
K2 introduced tip and tail rivets 7 years ago on the Factory Series skis. They were functionally developed for additional protection, reinforcing the tip and tail of the ski against delamination. Although function is still the primary purpose, K2 has evolved the rivets and plates into stylized components.

Bioflex Core
All of our women’s skis use a combination of fir and spruce in a unique core known as BioFlex, a process where a dense fir core underfoot is fused with lightweight spruce at the tip and tail to reduce swing-weight. With the Alliance’s involvement, K2 developed a technology specific for women: lightweight and easy to maneuver, yet sturdy and high-performance.

Removable Tip and Tail Rivets
K2 tip and tail rivets have evolved to allow the addition of a pre-cut climbing skin onto the ski for all your backcountry access needs. The skin attachment is offered on the HellBent, obSETHed, Kung Fujas and MissBehaved.

Tail Strap Clip
This adjustable strap interfaces with the tail hole to secure and register the skin to the center of the ski. Unlike most clips which create friction by dragging in the snow every step, this clip sits on top of the ski, thereby improving glide and efficiency.

3.5 MM Edges
Most of our factory series skis come standard with a thicker more durable steel edge to prolong the life of the ski. Normal thickness of edges is around 2.5mm whereas the Factory Series skis’ use a 3.5mm edge to withstand the added abuse. This thicker edge is far more resistant to crackingand grinding for a more durable, longer lasting ski.

Z Clip Attachment
Quick, simple and lightweight, the Z Clip utilizes the hole in the ski tip and eliminates the skin fold-over required with typical D rings. This not only reduces weight, but gets rid of the buildup of snow that accumulates under the fold, which eventually peels your skins off.

Forward Mounting Position
All T:Nine skis are built with the midsole of the ski 2 cm forward relative to the standard midsole point for a men’s ski. This accommodates the anatomical fact that the center of mass for a woman is generally much lower than that of a man. By moving the midsole forward, it places the center of mass of the average woman in the optimum position over the ski, allowing for more control and easier turn initiation.

Green
Bamboo and Paulownia stringers are used to add lightweight strength to the ski cores. These wood species are fast growing and locally sourced making them a better renewable choice than traditional cores.

Torsion Box Technology
Torsion Box construction is the foundation for the widest range of skis designed by K2. Depending on the dimensions of a ski, and the amount of flex and torsion designed into it, one model of a Torsion Box ski can differ greatly from another. The versatility in the construction enables us to build everything from entry-level through expert skis. While there will be significant differences between a DarkSide and a MissConduct, they do share the common traits of ease, forgiveness, responsiveness, and energy that can be found in all Torsion Box skis.