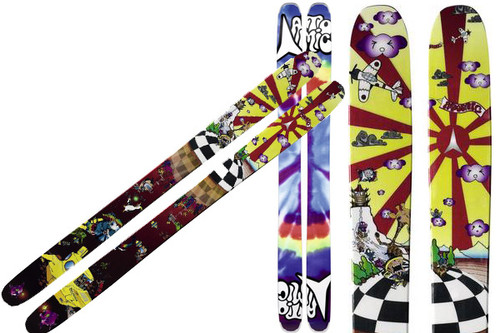 The Bent Chetler is the ski Chris Benchetler has always dreamed of – and which he has now designed in collaboration with Atomic. A Rocker Shape at the tip and tail and, in between – and this is the secret – a camber which even on hard ground delivers stable performance through turns. Once again it was Chris Benchetler himself who came up with the unique design for the new 2011 model.

Atomic Bent Chetler Skis 2011: Chris Benchetler’s pro-model, the backcountry jib-friendly Atomic Bent Chetler features a traditional shape and a versatile mix of rocker and camber that slays hardpack and pow alike. The Pop Rocker, a blend of tip and tail rocker and camber underfoot providing killer float in deep snow, especially when you’re stomping switch power landings. Camber lets you carve into backcountry jumps and pop hard on take offs and increases hardpack performance at the resort. Atomic gave the Bent Chetler a three layer sidewall underfoot for durability and edge grip at ski center, and used Half Cap construction in the tip and tail to lower swing weight, stand up to ski-to-ski impacts, and resist chipping. The wild graphic can be summed up like this: ADD topsheet, LSD base.