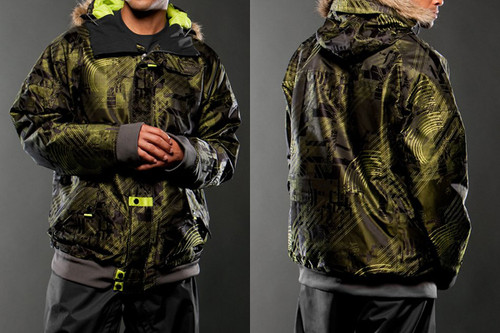 Two years after breaking onto the jibbing scene, Eiki Helgason was named “Rookie of the Year” by Snowboarder Magazine. Destiny will not be denied, and we weren’t about to deny Eiki the performance that makes his jacket jam-worthy when he’s ready to cut loose. You’re looking at LANDIC, a proud member of the Oakley Pro Rider Series and the tech gear of an Icelandic snowboarding superstar.

Whether he’s working rails or throwing rodeo 1080s in the pow, Eiki needs a fit that gives him coverage without putting his tricks in a harness. The LANDIC JACKET has an anorak length for added coverage. We placed low-bulk Thinsulate® insulation in critical zones and added underarm vents for temp control. Magnets hold down the storm flap and keep the hood from flopping when Eiki’s not wearing it. If he wants, he can remove the hood entirely, and we even made the fur piece removable. When the sky gets messy, he has the protection of 20K mm waterproofing with a level of breathability that keeps comfort in the zone. (Match this jacket with the LANDIC SNOW PANT, sold separately.)