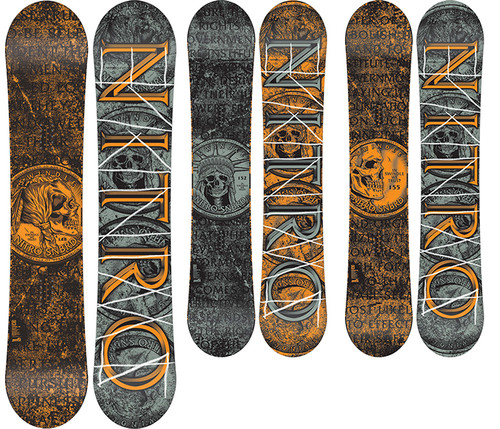 The Nitro snowboard 2015 comes with a FREE Earbud Headphones and FREE USA shipping!

The Nitro Swindle snowboard was designed for the park and street hobos; the guys who are in the park from open until close and migrate into the streets for late night missions. This year we did a hobo coin graphic to show respect to all the die-hards out there. The Nitro snowboard 2015 is equipped with our Railkiller Edge, Powercore II and Whiplash Core Profile to handle the daily beating all freestyle boards go through, while maintaining the perfect blend of flex and pop. Mount up the Nitro Swindle snowboard and convert your neighborhood into a personal snowboard park. The Nitro snowboard 2015 is the split-board of the streets! If you're in the area, visit our Big Bear Lake Ski and Snowboard Rentals shop here!

Railkiller Edge-Your secret weapon on rails! With its unique edge profile and an impact resistance of more than 200% compared to a standard edge, this proprietary construction can take on any rail challenge. Take a file to them or ride them hard and wear them down naturally, this chunk of steel has enough meat for years of abuse.

Sintered Speed Formula HD Base-Utilizing a new base material compound, we have been able to achieve higher abrasion resistance, increased wax absorption and higher on-snow speeds. All in an ultra clear package for extra crisp graphics.

Whiplash Core Profile-This profile features reduced thickness between the inserts with added meat outside your feet for maximum ollie power, while maintaining a perfect press flex.