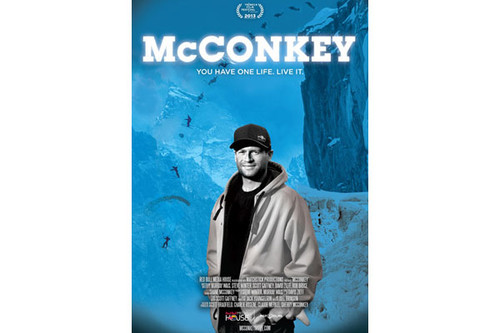 McCONKEY, a much anticipated feature-length documentary, is a heartfelt examination of the legacy one athlete left to the progression of his sports, and the path he paved to conquer his dreams. Shane McConkey is revered as a pioneer of freeskiing and ski-BASE jumping, and through his talent and ability to use his trademark irreverent humor he inspired countless lives. In a film from Red Bull Media House in association with Matchstick Productions, McCONKEY celebrates the life of one of the world’s ultimate innovators. Proceeds from the film will go to a trust set up for the McConkey family.

“What makes McConkey such a phenomenal doc, aside from all the endless amounts of footage, is how much it transcends simply being a profile piece on this person and becomes inspiration for any and everyone watching it…There’s a great line in the film from skiing legend Scot Schmidt, who explains that people like Shane don’t live like everyone else. Instead, his mentality is “I’m not afraid of death, I’m more afraid of not living fully.” -FirstReviews.net

“What is perhaps most remarkable about McConkey is how much potential it has to appeal past the extreme sports set. The film is about that one-in-a-million drive that pushes some people beyond the boundaries of what anyone had previously dreamt possible. Few films so succeed in showing us what makes someone like that tick.” -Twitch.com

“It’s a documentary rooted in action. Shane fans will appreciate everything from his first backflip off the Palisades to his revolutionary Alaskan descent on water skis.” -Freeskier