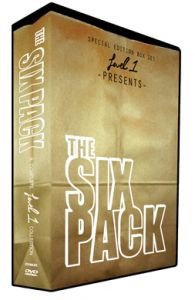 We’ve thrown together Level 1′s first six films in this super limited edition box set. Check the humble beginnings back on the East Coast in “Balance” and “Second Generation” re-mastered to DVD for the first time ever, and including never before seen special features and interviews. Follow the progression up through the cult classic “Strike Three” and then revel in the recent worldwide hits, “Forward” and “High Five” Throw in “Shanghai Six” and you’ve got a collection of films documenting the progression of hot newschool skiing action since its inception. Sure to become an instant classic, pick up your Six Pack before they’re sold out!