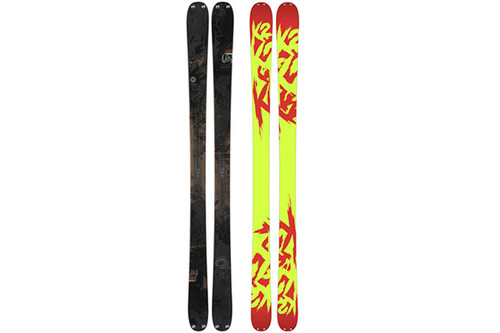 The Recoil is back as the most versatile twin tip ski in K2's lineup. From 80-foot park jumps to high consequence rails, to tight trees, or a zipper line of slushy bumps, the Recoil's predictable flex pattern and bombproof durability has you covered.

Wood Core-K2 uses a variety of wood cores for energy, rebound, and a liveliness only found in wood core skis. Our wood cores consist of a blend of different species of wood based on the desired flex and target performance of the ski.

Absorb TwinTech Sidewall-This construction sandwiches a urethane layer in between ABS for shock ABSorption, lessening the impact of harsh landings. Urethane is used underfoot to maximize the dampening, but ABS is used toward the tip and tail to maximize performance and edge control.

Swap  Base-The bases of these skis can come in two different color ways, depending of how the colors are swapped on the base. This gives two looks to the same ski, and ensures you are not rocking the exact same pair as your buddy who just picked up the same pair of skis.