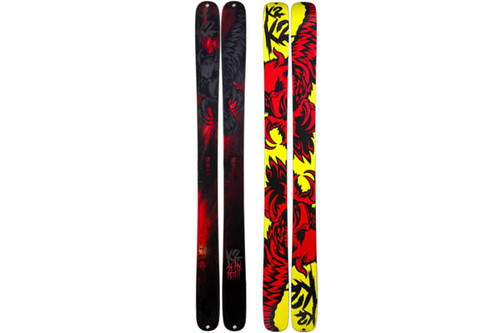 K2 is honored to unveil Sean Pettit’s first pro model ski, designed specifically to fit his needs as a skier. With almost half his life already devoted to being a pro, Sean has followed in the footsteps of other K2 teammates and redefined the art of skiing and tricking large-scale lines. Now it is Sean’s turn to lead the next evolution of bigmountain freeskiing with the development of a ski all his own: The Pettitor.

This Pettitor’s habitat is in big mountain powder. It has a keen eye for natural takeoffs and is built stiffer than any other ski in the line for high-speed stability and soaringinto stomped landings off oversized cliff bands. Sean also brought the contact points closer together for a more playful ski with reduced swing weight and maneuverability when hunting smaller game in the trees. The tip and tail Powder Rocker preys on deep and variable snow while the 120mmwaist not only provides excellent floatation, but also delivers daily versatility thanks to adequate camber underfoot.

This tip has the most elevation and longest measurement of Rocker and offers skiers a “surfy” feel with enhanced soft-snow performance. The camber region still exists to ensure edge-hold on firmer conditions. Simply put, Powder Rocker provides unmatched flotation in deep snow.

The tip is still wider but closer in width to the tail. This allows the ski to perform exceptionally well while skiing in the forward direction but the taper enables the skier to have similar switch arc for better and more consistent switch riding.

Holes in the tip and tail are not only the attachments points for K2 skins, but they also fit the functional needs of a backcountry skier including the ability to build a rescue sled or construct various ski anchors. The holes are equipped with removable plugs.