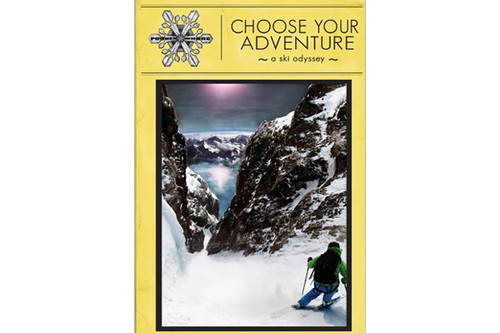 Powderwhore Productions, a backcountry ski film company based in Utah, is proud to announce its eighth annual ski movie, called “Choose Your Adventure.” . Despite the underwhelming winter of 2011-12, in which snowfall reached near record lows and avalanche conditions were unstable around the West, the Powderwhores were able to make the most of the conditions, with trips to Cerro Castillo, Chile; La Grave, France; the Antarctic Peninsula; Svalbard, Norway; Mount Foraker, Wyoming; British Columbia, Canada, and the Wasatch Mountains in Utah. The film features top backcountry skiers and snowboarders, including Chris Davenport, Jake Sakson, Andrew McLean, Seth Wescott, Dylan Freed, Courtney Phillips, Noah Howell, Matt Reardon, Drew Stoecklein, Forrest Coots, Ian Provo, Neil Provo, Chuck Mumford, Darrell Finlayson, Bob Athey, PY Leblanc, Jason Thompson, Todd Stuart and other mountain characters. “We are playing with the theme of the old Choose Your Own Adventure books. Remember those?” says Powderwhore athlete and co-owner Noah Howell. “Our interest lies in finding exotic locations and people with real stories and objectives. We wanted to tag along and capture their motivation for heading into the mountains. It’s more of an authentic experience this way, instead of a staged video shoot. We traveled light and fast so we didn’t interfere with the actual adventures as they unfolded.” Chris Davenport joined the filming while on a boat on the Antarctic Peninsula. “I have had the opportunity to ski on the Antarctic Peninsula three times and it has quickly become one of my favorite places in the world for ski mountaineering,” Davenport says. “I love life on the boat, and the easy access to incredible ski terrain make it hard to beat. Throw in the amazing wildlife and gorgeous ocean views and you have a location second-to-none for the new film ‘Choose Your Adventure.’” In the end, “Choose Your Adventure” is a feature-length film that celebrates exotic locations, wild adventures, and inspired personalities.