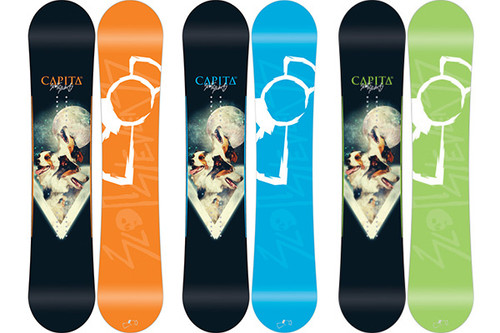 Comes with a FREE Snowboard DVD and FREE USA Shipping!

As one of the most influential snowboarders on the planet, Scott Stevens has taken web videos and DVD players by storm. His snowboarding is truly avantgarde, and his skateboarding and Frisbee throwing ain’t too shabby either. Just ask Scott’s best friend – Maddie the dog. She loves hanging around the skatepark watching no-complies. Given that ol‘ Sleepy is one of the most searched pros on the Internet, Maddie’s status is soaring as well. So, we at CAPiTA decided to offer the world’s first Dogmodel™. That is, a professional level snowboard designed by and for a dog – ridden by Scott Stevens.

“I think designing a board graphic is like getting a tattoo. It really has to be something that represents who you are and what you love. I can vouch that dogs are a man’s best friend. Maddie (my dog) is my best friend and is always there for me. We’re a team whether its skateboarding, snowboarding, swimming, hiking, biking, fetch, you name it. It’s a sheer honor having a board with CAPiTA! Thanks!”

Now available in three sizes and inspired by the Transworld Top Ten Good Wood winning Ultrafear, the Scott Stevens Pro model is stronger and ready for you to get creative on the snow. These boards have a very damp, durable feel, with a low swing weight so you can pop higher ollies and quickly maneuver the board in tricky situations. This board was made to jib, bonk, slide, shred, ride, slap, and pop off of just about anything. We might not be able to do it like Sleepy Stevens can, but it’s sure fun tryin’.