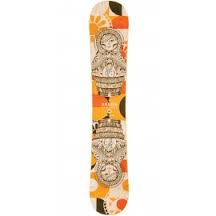 Comes with a FREE Earbud Headphones and FREE USA shipping!

Also awarded in the past, the Cadence is a rocker board designed specifically for women who take a park set of skills to the whole mountain.


Flex: This board is slightly softer than middle of the road which still makes it versatile for all mountain riding but remains playful for when you get into a freestyle situation.

Stability: There was never a point in the day riding the fresh powder, rutted powder, or trees where it felt unstable. This board just wants to cruise.

Ollies: It’s not the most poppy board I’ve ever been on but it is still decent which made it fun.

Pop On Jumps: Sometimes with reverse camber you lose a little bit of pop on a jump, but this isn’t the case with their System. It just did the job really easily.

Butterability: From someone who rides hybrids and will always be a camber kid, I have to admit the butterability of this full reverse offered was spectacular.

Jibbing: Several features were hit in Park Lane but nothing big, but what was hit I was able to press easy enough and my edges never hooked up.

Carving: Fun turns in the snow. I’d have to say with the reverse cambered shape that at high speeds it would tend to be a bit squirrely. Under the conditions ridden, really fun, but no mocking down the trail was sought after. This isn’t the board I’d want to break the sound barrier on anyway.

Rider in Mind: The all mountain rider who wants to get after it in the trees. The flex pattern and smiley reverse shape allow for quick reaction to trees (after all, trees don’t move). The floating ability upon the white fluffy stuff came with such ease