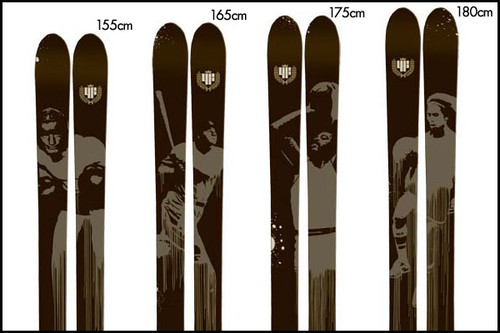 
Comes with a FREE Beanie and FREE USA Shipping!!!!

Overview
The TNK is our competition park, pipe and all-mountain ski. Niklas revisited his 3-year standing signature model with an improved core profile to accommodate the biggest of parks. Beyond the core, Niklas also incorporated a Die Cut sintered race base for blasting the pipe. The shape is nearly symmetrical by design thus providing the easiest switch riding ever. Worry not on swing weight, this ski has LITEblock core technology to keep you spinning like a top.

As written by Niklas Karlstrom - designer (Sweden):
I love the TNK. This is a ski I use for Park, Pipe, Groomers, Powder, Ice, you name it. It's got a really good turn radius which makes it perfect for carving of jumps or just cruising around groomers. Take it to the pipe and it'll blow your mind! The combination of sharp edges, stability, fast base, and pop is almost scary for boosting the pipe.

As written by Finn Anderson (USA):
The TNK is a ski I know I can rely on whenever I'm grinding, jumping, or anything in between. It’s soft enough for jibbing, stiff enough for half-pipe, and always maintains perfect pop off of jumps- the ultimate park tool. I like to jump in the morning when the landings are fresh, then slide rails in the afternoon when the snow gets sloppy. By far the best jib ski I’ve ever shredded on.

As written by Erich Kunz (USA):
The TNK is my park ski of choice. I spend most of the season on larger skis, so transitioning to a wider park ski in the late spring is much easier. Beyond their healthy girth, the TNKs are very lively, but by no means a noodle.

As written by Hugo Pelletier (Canada):
I love my TNK 175 cm they are super reliable and so soft I bring them with me all over the country to shred up different mountain.

As written by Erik Naess (Norway):
The TNK is the ski I use everyday, in the park, compact backcountry and in the streets. Wide enough to ski outside the slopes, but like I said not in powder. Not much carve, makes it stable in the park and with a little more flex on the front and back tips, it is so bouncy and fun! So a run from the top of the chairlift, skiing trough the woods, entering the park, hitting all the elements and just make up your own stuff on knuckles, skis have never been more enjoyable.

As written by Keltie Hansen (Canada):
I use the TNK when ever i ski pipe which is quite a lot. I love getting up in the morning and standing at the top of the pipe and than dropping in for the first time. The TNK always feels really solid and strong beneath me, but flexible enough to let me gain momentum to boost out of the pipe. the feeling of airing out and doing a big trick and smoothly coming back in to the pipe doesn't beat anything in my mind!