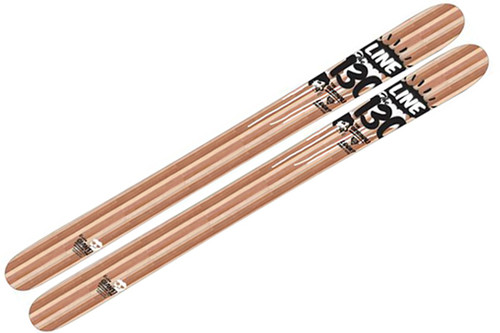 The 130 Video and Description and Video


The original modern day powder ski
Year’s ahead of it’s time, it’s designed to float effortlessly in the deep stuff, without sacrificing control on the groomed, now at a price that eliminates any remaining excuses for riding skinny skis in the pow.
Length: 186
Shape: 155-130-148

The art was created by our in-house Mac jockey, Nathan Canupp who was inspired by his memories of 1950’s advertising. He’s twice as old as he looks.

The concept started back in 2001 when the only difference between a powder specific ski and an all-mountain ski was the width and the widest powder ski was still under 105mm. Lucky for us, Eric Pollard had a vision for a powder ski that was based not on traditional all-mtn skis but instead designed from scratch based on what actually would work best in powder.

The engineering was driven by Eric Pollard who was quick to point out that one of the most critical factors in a ski’s design to keep it a float in the powder was the tip geometry. At that time, most skis shared the same tip rise and profile. We completely re-invented the way we designed a tip shape using multiple radii to give it a very subtle Early Rise so that it would automatically be angled up out of the snow fast, then plane on top for consistent float. Another Pollard created technology was the the Early Taper which didn’t exist at the time and moved the widest point in from the tip so when on edge, the ski will not hook in pow. We’re all honored and happy to see how the original 130 has since influenced today’s modern powder ski designs.

ALL OF OUR TECHONOLOGY is from the future.
We’ve been using the same time machine since 1995 to bring you the innovations that can only be described as one step ahead of the future. Designed for skiers by even smarter skiers, these are the one-of-a-kind technologies that makes skiing more funner and makes you a better skier than you were the day before, every day of the year.

4D Fibercap
Fiberglass layered in 4 directions around the ski core

Fatty Base & Edge
Twice the thickness of standard base and edge